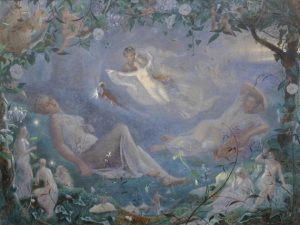 Dreams are the guiding words of the soul.
~ C.G. Jung

Even when I am asleep, someone inside me is awake and knows.
~ Rumi

An uninterpreted dream is like throwing away an unopened letter from God.
~ Talmud

Learning the language of your dreams is a powerful tool for self development, self awareness and understanding the nature of soul and psyche. Also, Earth Herself is dreaming; learning the language of the dream involves one in the Great Conversation going on among all living things.
I help individuals to learn this language and understand the value presented to them regularly in their nightly visions. In my beautiful office in downtown Asheville, on the telephone, on Skype or Zoom we can engage this exploration together.
I also conduct dream groups. Write me or call with inquiries.
“Dreams are pure nature,” says Jung. Nature is offering us this gift, let’s listen! They invariably provide profound, practical, useful and healing insights, designed by the psyche just for us, saying what we need to know now, for the sake of wholeness and healing.

Why Work with your Dreams?

An article by Tayria Ward, Ph.D.

The Talmud states that “An uninterpreted dream is like throwing away an unopened letter from God.” Whatever we call that intelligence that is bigger than us, it speaks to us in dreams. Every scripture, prophet and world myth has examples of people receiving important messages in dreams. Joseph received Jesus’ name in a dream. Buddha’s mother had a dream that prophesied his birth. Joseph in the Old Testament was treasured by the Pharaoh for his gift of dream interpretation. Einstein received his theory of relativity in a dream. Paul McCartney first heard “Yesterday” in a dream. The list goes on.

A course on Dreams, the Dreamtime, the Indigenous Mind and Dream Thinking.

Enjoy this 12-segment course I created with the
United Palace of the Spiritual Arts
in Manhattan, NY.

Dreams of the Night

Learn the Language of Your Dreams

Testimonial about the experience of working with Tayria in Dream Analysis and Tarot:

In the Buddhist tradition, what you provided in your reading last night was an exquisite transmission energized with sacredness and beautiful skillfulness.  There is an awakeness  that emerged in my consciousness during the night and is blessing everything this morning.  There is only one way this lived experience could have happened ~ the breath of your own awakeness flowing in my direction ~ a breath filled with benevolence and the utmost generosity.  I say to this, “Amen, Beloved Sister!”
~ A. M.

Testimonial about the experience of being in a dream group:

Dream group has been the most successful therapeutic experience I’ve had.  I’ve always been prone to intellectualize and have a hard time feeling the emotion while I’m talking about specific events in therapy.  Also, I can be feeling the emotion but not able to verbalize it.  Talking about my dreams and the symbolism and hearing others speak about their dreams and mine helped me bridge the gap between my emotions and my ability to verbalize them and know where the emotions originate.  That has been so helpful to me, I can’t tell you.
-Karen Nilsen

In a dream, in a vision of the night, when deep sleep falleth upon men, in slumberings upon the bed; then he openeth the ears of men, and sealeth their instruction.
Job 33: 15,16

As a man now reasons in dreams, so humanity also reasoned for many thousands of years when awake.
Friedrich Nietzsche

Even when I am asleep, someone inside me is awake and knows.
Rumi

An uninterpreted dream is like throwing away an unopened letter.
The Talmud

Dreams are impartial, spontaneous products of the unconscious psyche, outside the control of the will. They are pure nature; they show us the unvarnished, natural truth, and are therefore fitted, as nothing else is, to give us back an attitude that accords with our basic human nature when our consciousness has strayed too far from its foundations and run into an impasse.
C.G. Jung, CW 10, par. 317

Dreams are the royal road to the unconscious.
Sigmund Freud

We can say that dreams are the letters of the Self which the Self writes to us every night – telling us, do a bit more of this, or a bit less of that, or go ahead to the left, or go ahead to the right. And as I say when one looks back one sees there is a pattern in this, as if the Self is having a plan with us, a kind of destiny.
Marie Louise von Franz

Dreaming is one wing of a butterfly and waking is the other. Each wing tells half of the story of life to the other, mirroring each other ceaselessly to keep aloft. In the heart the two wings meet and the substance of us is ripened.
The Tzutujil Maya of Guatamala

A dream has to be lived with. It is not a puzzle waiting to be solved by the intellect. It is, rather, a living reality and must be experienced. Certain key dreams, certain images, will last a lifetime.
James Roose-Evans

In the beginning was the dream. Through the dream all things were made, and without the dream nothing was made that has been made.
Thomas Berry

Until you make the unconscious conscious, it will direct your life and you will call it fate.
C.G. Jung

All the things one has forgotten scream for help in dreams.
Elias Canetti

A dream that is not understood remains a mere occurrence; understood it becomes a living experience.
C.G. Jung

Those who have compared our life to a dream were right…. We sleeping wake, and waking sleep.
Michel de Montaigne, Essays, 1580

I dream my painting and then paint my dream.
Vincent Van Gogh

The realization that there was a pattern to my life, one which made sense, came about in a curious way. Shortly after moving into the Villa Seurat I had begun to record my dreams. And not only the dreams but the associations which the act of transcribing them induced. Doing this over a period of months, I suddenly began to see, “To suddenly see,” as Saroyan says somewhere. A pregnant phrase—to anyone who has had the experience. An expression which has only one meaning: to see with new eyes.
Henry Miller

For the sake of mental stability and even physiological health, the unconscious and the conscious must be integrated and thus move on parallel lines. If they are split apart or ‘dissociated,’ psychological disturbance follows. In this respect, dream symbols are the essential message carriers from the instinctive to the rational parts of the human mind, and their interpretation enriches the poverty of consciousness so that it learns to understand again the forgotten language of the instincts.
C.G. Jung

We can say that dreams are the letters of the Self which the Self writes to us every night – telling us, do a bit more of this, or a bit less of that, or go ahead to the left, or go ahead to the right. And as I say when one looks back one sees there is a pattern in this, as if the Self is having a plan with us, a kind of destiny.
Marie Louise von Franz

Dreams are the guiding words of the soul.
C.G. Jung

A dream is a psychic fact.
C.G. Jung

WHAT TO REMEMBER WHEN WAKING

In that first
hardly noticed
moment
in which you wake,
coming back
to this life
from the other
more secret,
moveable
and frighteningly
honest
world
where everything
began,
there is a small
opening
into the day
which closes
the moment
you begin
your plans.

What you can plan
is too small
for you to live.

What you can live
wholeheartedly
will make plans
enough
for the vitality
hidden in your sleep.

To be human
is to become visible,
while carrying
what is hidden
as a gift to others.

Excerpt from ‘What to Remember When Waking’
From RIVER FLOW: New and Selected Poems
Many Rivers Press. ©David Whyte